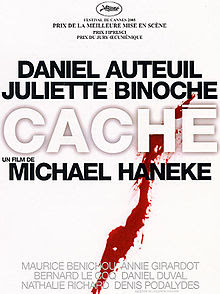 I think what makes Michael Haneke's Cache so interesting to watch could be because of what it's about. What I found so bewitching about it was how the film was constructed. (I like the technical side of film sometimes, so sue me.)

The more appealing factor of Cache is that it's not like what you would expect as would with an Alfred Hitchcock film. We get thrown into the story long after it started. The tapes delivered seem pointless as they capture nothing of significance. But they hide something of importance.

Like any good suspense film, actors are key. The stars of Cache are Daniel Auteuil and Juliette Binoche, both fine actors of French cinema. Think of them as the French versions of Laurence Olivier and Joan Fontaine in Rebecca. He's hiding a secret while she is blissfully unaware of what it is. Well played, Mr. Haneke.

I'm not sure if it was Haneke's idea or cinematographer Christian Berger's, but the numerous uses of long takes is remarkable. The unflinching camera records every moment as if hidden from the characters' gazes. Even Hitchcock couldn't think of something that clever. (Okay, that famous zoom shot in Notorious is pretty good.)

Cache is just really mesmerizing. Apparently French films know how to capture true suspense. (Diabolique and Eyes Without a Face also confirm this.) If you haven't seen this, answer this question: why?