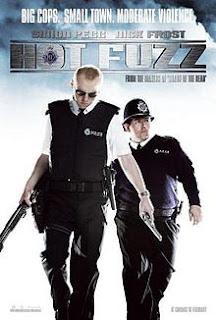 I'm fairly certain that Edgar Wright is slowly becoming a favorite. After all, just this summer I saw Scott Pilgrim vs. the World and Shaun of the Dead, and pretty much loved them both.

Was the third time also the charm when I saw Hot Fuzz? You bet it was. Featuring Shaun of the Dead duo Simon Pegg and Nick Frost, it's perhaps even better than their previous work with Wright.

Pegg and Frost are basically the British modern day equivalents of Lemmon and Matthau. (You know it's true.) Every scene of theirs just radiates comedy gold. Pegg tries to keep the peace while Frost has all hell break loose. They ain't kidding when they say opposites attract.

It's the small details that make Hot Fuzz all the worthwhile. There are those small references to Shaun of the Dead. There's the fact there's a superbly sly Timothy Dalton among the cast. (He ain't James Bond here.) But I think my favorite aspect is that the guy who did the music for this also does the music for Sherlock.

It takes a while to warm up but when it does, Hot Fuzz is damn funny. (The final half hour is all sorts of ridiculous perfection.) Oh, I need to venture into the comedic minds of Wright, Pegg and Frost more often. They're good at what they do.