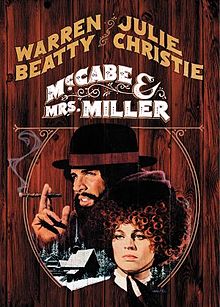 Robert Altman's McCabe & Mrs. Miller from some of the director's later work. It doesn't rely on the ensemble cast Altman is famous for. Instead, its stars are a Hollywood playboy and a British beauty.

Now that might sound odd, but it surprisingly works. The film is a western, but not like the westerns John Ford is famous for. It's more of a glimpse of what America became.

Julie Christie I already knew was a fine actress, but Warren Beatty took a little more persuading. The films I previously saw him in (Heaven Can Wait, Bonnie and Clyde, Bugsy) portrayed his character as that of a carefree ladies' man. (Or, more specifically, as Beatty himself.) Is he like that in McCabe & Mrs. Miller? Not in the least bit.

Along with Beatty and Christie's acting and Altman's direction, the cinematography by Vilmos Zsigmond is to die for. It captures the ruggedness of the film's nature while also displaying a sort of beauty amid it all. How the hell did Zsigmond get snubbed?

McCabe & Mrs. Miller is dubbed as an essential of Altman's, though I fail to see the big picture. It didn't particularly grab me as a stunning piece of cinema as some film snobs might say. A re-watch in the near future is inevitable, but I'll stay with these musings for the time being.