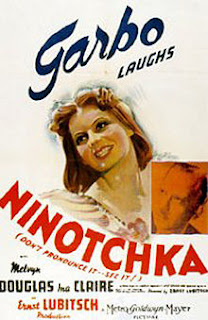 Social commentary in film was very common during World War II. Try as the audience might, they couldn't escape what was going on in the world outside of the theater.

One such film was Ernst Lubtisch's Ninotchka. It provided a depiction of conformity in a particular country yet showed a lighthearted tale set in another more independent country, all while showcasing that trademark charm of his.

But the charm of Ninotchka isn't entirely from Lubitsch. One of the film's writers was Billy Wilder. (And y'all know my thoughts on him.) Sure, the film feels more Wilder than Lubitsch at certain points, but the amount of class throughout is pure Lubitsch.

The stars of Ninotchka are Melvyn Douglas and Greta Garbo, both fine actors from back in the day. Douglas displays class that was common among leading men of that era yet he has an aura that was different than that of, say, Gary Cooper. Garbo naturally showcases her exotic beauty while at the same time proving she can do comedy with ease. (You probably never would've thought that after seeing Camille, would you?)

Ninotchka is very clever, but that's expected from a script co-written by Wilder. Douglas and Garbo are great in their roles, being classy but not overdoing it. Released during the great movie year of 1939, it's clear to see why Ninotchka is one of the best of that year.