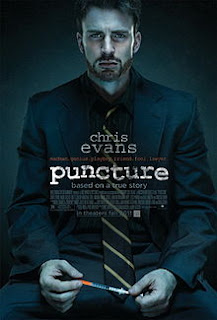 There are a number of films out there focusing on the justice system. It's either from the viewpoint of the client or the lawyer, usually in a positive light despite their vices.

Now Mike Weiss (Chris Evans), the protagonist of Adam and Mark Kassen's Puncture, isn't exactly Atticus Finch in the way of morals. He's covered in various tattoos, fortunately all hidden by his suits. But Mike's main flaw is that he's an addict. He pops pills, snorts coke and shoots up. Yet his mind remains sharp.

I think that's what makes Mike an interesting person. He's fully aware of his demons and he doesn't let them control his life. However, he doesn't think about controlling them. In a nutshell, he's the definition of an anti-hero.

And the way Evans plays him is truly fascinating. Bear in mind this is someone who's more recognized for his work in comic book movies, so seeing him actually being an actor instead of a movie star is hypnotizing. Here's hoping to more solid roles for him because he's pretty damn good at his job.

The film itself is very transfixing, especially in the knowledge that it's a true story. The script has a few flaws, but those can be easily overlooked thanks to Evans' stellar performance. In fact, this would make for a great double feature with The Insider.

My Rating: ****1/2
Posted by MovieNut14 at 11:17:00 PM
Email ThisBlogThis!Share to TwitterShare to FacebookShare to Pinterest
Labels: 2010s, movies, reviews