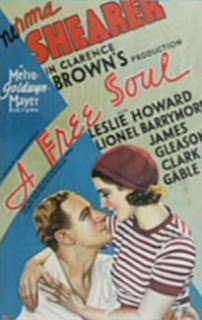 Clarence Brown's A Free Soul contains everything that made a film from the pre-code era famous. A respectable member of society falling in love with someone from the wrong side of the tracks. A scandal just waiting to happen. Murder.

Jan Ashe (Norma Shearer) is the daughter of prominent but alcoholic lawyer Stephen Ashe (Lionel Barrymore). She's engaged to Dwight Winthrop (Leslie Howard), but she has no intentions of marrying him. Instead, she carries on a fling with Ace Wilfong (Clark Gable), a gangster and Stephen's client.

Brown most definitely got some great performances out of his actors. Long before they were Rhett Butler and Ashley Wilkes, Gable and Howard wonderfully represent the bad boy and the perfect gentleman in Jan's life. Barrymore represents Jan's crumbling pillar of support, getting weaker from age and drink.

But this show belongs to Shearer. Her character goes through a number of events that any other actress in the role could have easily overdone it. Shearer, however, knows what she's doing. And boy, does she nail this role.

A Free Soul is one of those films that made a bit of an impact upon its release but over eighty years later, it has somewhat been forgotten. It's hard to see why: stellar actors, an amusing story...how has it been forgotten?