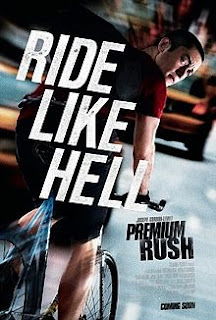 Ah, New York City. One of the most filmed cities in the world. It's hard to say precisely how many titles were filmed or set in the Big Apple, but it's definitely among the hundreds.

David Koepp's Premium Rush is a new movie set in this city. It's an interesting concept to be honest, but you might be wondering if it delivers. (No pun intended.) To answer your question, yes, it does.

Premium Rush stars Joseph Gordon-Levitt, who has really come a long way since his days on 3rd Rock from the Sun. In these last few years, he has displayed his abilities as both a movie star and an actor. He mainly fits into the former category here, but he still displays the quiet charisma that's evident in any role he does.

Another name in Premium Rush is Michael Shannon. Here, he displays James Cagney's snarl mixed with a bad impression of Edward G. Robinson's voice. It's not among his best work but as he always does, Shannon makes his role one that leaves a small impact in the movie.

Premium Rush most likely won't get ranked among the best of this year, but it's still entertaining. It starts off slow, but the pace picks up gradually as the movie wears on. Gordon-Levitt and Shannon are clearly the highlights, but there might be something else for other people that see it. It's good, but it's more suitable for rental.

My Rating: ****
Posted by MovieNut14 at 10:48:00 PM
Email ThisBlogThis!Share to TwitterShare to FacebookShare to Pinterest
Labels: 2010s, movies, reviews