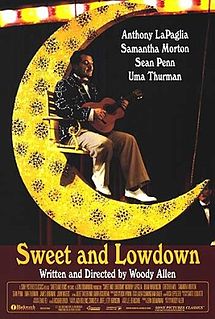 Woody Allen's Sweet and Lowdown is sort of different from the director's other work. I say sort of because this shares a few elements with Allen's earlier film Zelig but it's still a different film entirely.

The star of Sweet and Lowdown is Sean Penn, perhaps an unusual casting choice for a Woody Allen film. Surprisingly, it works. Perhaps it's because Penn is a loose cannon at times in real life that makes his character's impulsive behavior more believable. But that's just my perspective.

Samantha Morton in my eyes is a terribly underrated actress working today. Her work here is just one of several reasons for why she should be on everyone's radar. Allen told her to use Harpo Marx as an influence for her character and boy, does she follow through. (Best scene as proof? The moment she's listening to Penn play his guitar.)

It's sort of a known fact that almost all of the non-Quentin Tarantino films Uma Thurman is in are bad. I say almost because this was pretty good. (So was Dangerous Liaisons.) In her first scene, she gives off a sort of Dietrich vibe. (Probably because she's wearing a tuxedo.) Still, she also gives an amusing performance.

Sweet and Lowdown is very amusing. Not as great as some of Allen's other work but it's still very entertaining. Penn, Morton and Thurman are great, but Morton is my personal favorite. All in all, it's very much worth a look.