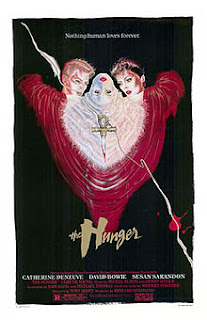 With Tony Scott's sudden and shocking death this past Sunday, we lost  a true visionary. I'll admit I haven't seen any of his films prior to his demise (I'm more versed with his brother Ridley), but I knew I had to see some of his work sooner or later.

For starters, I opted for his debut The Hunger. Perhaps not the strongest of Scott's overall work, but it does provide amusement for the most part. (Some might interested in an infamous sequence between the two leading ladies.)

Who else but Scott would cast French beauty Catherine Deneuve and British music star David Bowie as chic vampires? (No one, that's who.) It seems fitting since both of them have ethereal looks. I mean, who could portray something so sinister and seductive as well as them?

Storywise, the film crumples pretty quickly. From a visual standpoint, it's a masterpiece. It may look like footage from a fashion shoot in some scenes, but I think that was intended by Scott. (At least that's what I read.) Boy, if most films could look this slick, that'd be super.

The Hunger in toll is amusing in some scenes but not particularly memorable in the long run. Deneuve and Bowie just radiate pure cool. So do certain scenes, especially that killer opener. But all in all, it's all right.