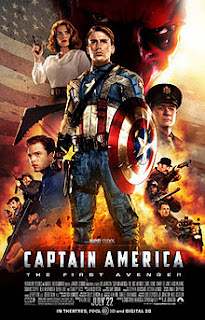 With the release of The Avengers earlier this year, it marked a possible shift for future superhero movies. It was also a collaboration of previous Marvel titles from the years before, including Jon Favreau's Iron Man movies, Louis Leterrier's The Incredible Hulk and Kenneth Branagh's Thor.

The last related movie released before The Avengers was Joe Johnston's Captain America: The First Avenger. Much like the other pre-The Avengers movies, this provides a certain amount of entertainment without steeping too far into ridiculousness. (Though it does do that in a scene or two.)

A key thing casting directors have to keep in mind when casting the lead role of a superhero movie is you need an actor who's likable and charismatic. That can definitely be applied to Chris Evans. The way he plays Steve Rogers is practically effortless and at the same time you just can't imagine anyone else in that role. Another win for the casting director.

The supporting cast is pretty stellar too. Hayley Atwell is dynamite in her role. I love Stanley Tucci's small part (and the reason for why he accepted the part). Sebastian Stan and Dominic Cooper provide some amusing moments. My favorite supporting actor, however, is Tommy Lee Jones just for his wiseass remarks. In all honesty, this is Evans' show.

Captain America: The First Avenger as mentioned above is entertaining but that's kind of it. It has its share of peculiarities (set in the 1940s and technology is heavily advanced for its time), but no matter. Just watch it for fun (and Evans' performance).

My Rating: ****
Posted by MovieNut14 at 9:24:00 PM
Email ThisBlogThis!Share to TwitterShare to FacebookShare to Pinterest
Labels: 2010s, movies, reviews