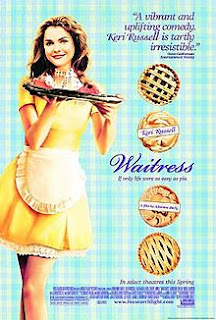 There are always those hidden gems released every year. Many times they usually get the love and recognition they deserved once they're on DVD. At least then they got easier access to audiences.

One such film is Adrienne Shelly's Waitress. If you judged the film by the trailer (which is a stupid thing to do at times), you would have thought it was a quirky, lighthearted comedy. Well, yes and no. Yes because it's a comedy but not in the strongest sense of the term, no because it's anything but quirky and lighthearted.

After all, the story is about a woman (Keri Russell) with an abusive husband and an unplanned (and unwanted) pregnancy. Her friends and co-workers (Shelly and Cheryl Hines) are supportive of her, but they openly admit they're glad they don't have her life. Throw in a handsome new doctor (Nathan Fillion) in town, and her life is in a whirlwind.

The actors are great. Russell displays that her character has flaws (and there are many). Fillon, whom many consider an underrated name in the entertainment industry, showcases charm amongst his role. There's also a scene stealing performance out of the recently departed Andy Griffith. Every performance just works.

Waitress is a very well done little film. Shelly captures a wonderful essence in her script and direction. (her supporting role is also lovely.) However, a feeling of sadness looms over this in the knowledge that Shelly didn't live long enough to see the release of this great film. Not to be avoided.

My Rating: *****
Posted by MovieNut14 at 2:51:00 PM
Email ThisBlogThis!Share to TwitterShare to FacebookShare to Pinterest
Labels: 2000s, directed by women, movies, reviews