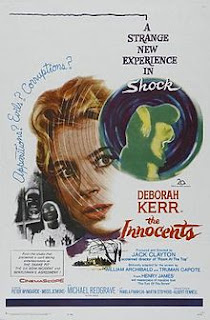 Just the opening moments of Jack Clayton's The Innocents prove that this film means business. (Well, what else do you expect for a film co-scripted by Truman Capote?) And yet, it's perhaps one of the most unjustly overlooked films out there.

Starring Deborah Kerr, The Innocents looks like the kind of film Alfred Hitchcock would take pleasure in making. (Can you imagine Kerr in a Hitchcock film?) Yeah, it's one of those films in all the right ways.

To me, a great horror film doesn't rely on blood and gore. It relies on suspense and a hell of a lot of it. You don't know if what Kerr is seeing is real or not. (I sure as hell don't know.) That's the genius of suspense.

You know what else makes a horror film great? The way it looks. Freddie Francis' cinematography is practically a textbook example of what horror films should look like. You literally can't see what's going to happen and it works.

Hell, everything in The Innocents just works. Clayton, who made the fantastic Room at the Top a few years earlier, clearly knows what he's doing. Kerr as per usual is at the top of her game here. Seriously, what are you waiting for? Go and watch this.