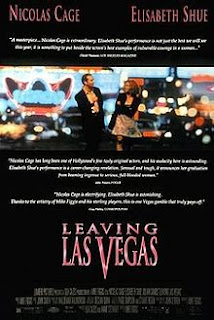 Addiction is a very ugly thing. It's painful to watch someone dig themselves into a hole they can't get out of.

You can only imagine the emotional pain Sera (Elisabeth Shue) endures as she watches Ben's (Nicolas Cage) rapid downward spiral in Mike Figgis' Leaving Las Vegas. She has encountered a number of different people thanks to her career choice. But she had never met someone as self-destructive as Ben.

Yet both are sort of one in the same. They both know life isn't perfect and try to make the most of it anyway. (Well, Sera is at least.) It's all the more hard to watch when they get thrown out of places and get banned from them for minor infractions.

Cage and Shue are just fantastic. Cage is mostly lambasted nowadays for his some of his projects. His work in Leaving Las Vegas will definitely shut the haters up. Shue is in the role of the hooker with a heart of gold, which by now is a cliche. But she gives the role a hardened edge yet still keeps a gentle nature. No surprise on why AMPAS bestowed Cage an Oscar and Shue a nomination.

Leaving Las Vegas is a fantastic film but it will leave you numb to the core. Figgis doesn't make this strictly a film about addiction. He also makes it about a romance doomed from the very beginning. And boy, this would make for a very depressing triple feature with Requiem for a Dream and Shame. (I'm a sadist, I know.)

My Rating: *****
Posted by MovieNut14 at 10:24:00 PM
Email ThisBlogThis!Share to TwitterShare to FacebookShare to Pinterest
Labels: 1990s, movies, reviews