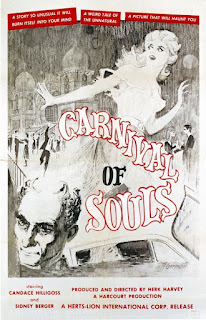 Herk Harvey's Carnival of Souls opens with a drag race gone very wrong. Mary Henry (Candace Hilligoss) miraculously survives the accident, much to the surprise of everyone and Mary herself. She moves on with her life but things take a turn for the strange for Mary...

Carnival of Souls was released the same year as Lawrence of Arabia and To Kill a Mockingbird so obviously a B-grade low-budget horror didn't have the same sense of prestige. But all these years later, Harvey's film has persevered in its methods and to no surprise, it influenced its fair share of other films.

Many aspects of Carnival of Souls certainly provided some inspiration for David Lynch when he made Eraserhead (the creepy as hell organ music in particular). George A. Romero credits this with inspiring the zombie makeup in Night of the Living Dead. Who would've thought a horror picture with unknown names attached would have such an impact?

Speaking of unknown names, there's something about Hilligoss that adds to the creepiness of Carnival of Souls. Perhaps it's the close-ups on her face as she realizes something's not right. With a streak of light across her widened eyes and arched eyebrow, she says everything with her face when most others would say it with a scream.

Carnival of Souls has a slow build-up to its ultimate finale but boy, does it pay off. What could've easily been lost amid the many high-profile films of 1962 instead becomes an influential work for future generations. And boy, that ending's a doozy.

My Rating: ****1/2
Posted by MovieNut14 at 10:02:00 AM
Email ThisBlogThis!Share to TwitterShare to FacebookShare to Pinterest
Labels: 1960s, movies, reviews