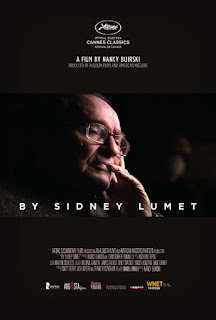 There's no denying that Sidney Lumet was one of the all-time great directors. With a career spanning half a century, he made films that stood the test of time. But how did his mind work when he was making a film?

Nancy Buirski's By Sidney Lumet may have a few answers to some of those questions. Using an interview of Lumet's conducted a few years before his death in 2011, the documentary focuses on the auteur's lengthy career as well as some of his upbringing.

Also featuring clips of his various projects, the documentary uses them to coincide with what Lumet is talking about. (There's one point where he's discussing Lloyd Bridges' outburst while filming an episode for The Alcoa Hour.) There's no denying that storytelling can affect people; sometimes it can be the person telling the story themselves.

At one point in By Sidney Lumet, the director talks about the recurring theme of morality in his works, admitting it's not an entirely conscious decision to have it be there. Regardless of that, it's that element that makes his films so engaging. (Why else do you think people still talk about his work?)

By Sidney Lumet chronicles how he worked as an artist and how he conveyed his beliefs (both personal and religious) into his films. Buirski shows how Lumet was in fact as human as many of the works bearing his name. After all, what's a better way to endure a legacy than by admitting one's flaws?

My Rating: ****1/2
Posted by MovieNut14 at 11:18:00 AM
Email ThisBlogThis!Share to TwitterShare to FacebookShare to Pinterest
Labels: 2010s, directed by women, documentaries, reviews