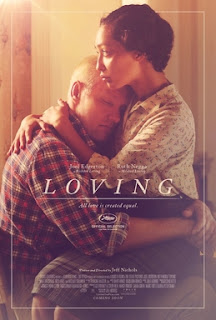 Our history is full of blights. We've rectified a few such as how the LGBT+ community is treated as a whole and how the battle of the sexes may very well be coming to a sort of resolve. But such achievements aren't without their many bumps in the road.

Jeff Nichols' Loving is set within a time when discrimination was practically the norm for everyday life. Nowadays such attitudes would be met with disdain from (most) people but fifty, sixty years ago, that disdain would be aimed at those supporting the cause. (And sadly we still encounter such animosity today.)

Now Loving focuses on Richard (Joel Edgerton) and Mildred Loving (Ruth Negga), an interracial couple whose marriage would change history. Of course that in itself doesn't begin to describe the story Nichols presents. It's one of, quite simply, love.

As Nichols showed with his previous films, Loving doesn't need big dramatic moments from its stars to make it effective. (Nor does it need passionate love scenes to show how Richard and Mildred feel for one another.) After all, less is more.

Loving is, well, lovely. It's perhaps the human film of the year, an accomplishment most strives to achieve but fails a majority of the time. Because of the work from Nichols, Edgerton and especially Negga, it's a work that becomes proof that love conquers hate.

My Rating: *****
Posted by MovieNut14 at 11:06:00 AM
Email ThisBlogThis!Share to TwitterShare to FacebookShare to Pinterest
Labels: 2010s, director: Jeff Nichols, movies, reviews