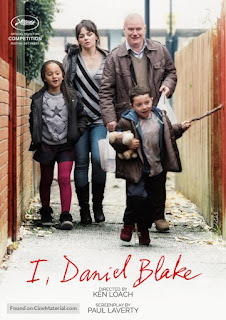 About fifty years ago, a common theme throughout British cinema was kitchen sink realism. With many of these titles based on works by "angry young men" like John Osbourne, they showed a bitter resentment towards society's treatment of the lower middle class. (Well, it was after World War II...)

Fast forward to today, and Ken Loach (himself a name from that era) uses elements from the British New Wave for his latest film I, Daniel Blake. (Think of it as though the protagonists from the New Wave's key films lived long enough to be even more bitter senior citizens.) And in light of recent events, it takes on a more resentful tone.

Now in the months following Brexit, the whole premise of I, Daniel Blake becomes angrier in nature. Loach doesn't shy away from exposing the flaws within his country's government. He depicts a catch-22 within the UK's welfare system. (Will things change in the coming months? Only time will tell.)

Dave Johns and Hayley Squires, the leads of I, Daniel Blake, are the beating heart of the film. It's their performances that bring the story to life, showing the misconduct of the government that's supposed to protect them. They will easily resonate with anyone in a similar situation.

I, Daniel Blake has a slow-burning fuse with its anger, waiting until the very end for it to explode. Loach shows restraint in his disgust towards his government and its failings, and in light of recent events, it becomes more deep-rooted. This is one film that will be a testament to our present political state.

My Rating: *****
Posted by MovieNut14 at 1:17:00 PM
Email ThisBlogThis!Share to TwitterShare to FacebookShare to Pinterest
Labels: 2010s, movies, reviews