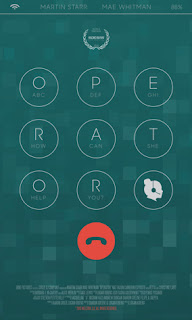 Supposedly we're now living in a time of ease thanks to the aid of technology. We can communicate with other more easily and all the information we want to know can be right at our fingertips. But is everything as ideal as it seems?

Logan Kibens' Operator follows Joe (Martin Starr) as he tries to fine tune an operating system. Using his wife Emily's (Mae Whitman) voice for the system, it becomes successful. But as their professional lives improve afterwards, their marriage starts to crumble.

In a way, Operator is like a different variation of Her. Both involve their male leads becoming consumed by these systems, finding their artificial intelligence more lifelike than the people around them. (Maybe there is some truth in the claims that technology is taking over our lives...)

Kibens in a way gives us a metaphor for society and how technology has changed us. We've become so attached to our smartphones and laptops, they've almost become as crucial as the air we breathe. While it's nice for introverted people to stay in touch with others, perhaps time limits on such devices wouldn't hurt.

Anyway, Operator certainly has its charms but of course it has its flaws as well. Admittedly its treatment of some of the female characters is questionable at times. But as stated earlier, it could make for a companion piece with Her. (Though which of the two is better is easy to say.)

My Rating: ****
Posted by MovieNut14 at 10:27:00 AM
Email ThisBlogThis!Share to TwitterShare to FacebookShare to Pinterest
Labels: 2010s, directed by women, movies, reviews