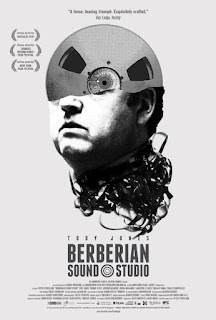 Peter Strickland's Berberian Sound Studio is far from your conventional film. It doesn't rely on proper scares to get its point across but rather unusual effects to make it so. Many of its elements are of the low-key variety but it morphs into something different from what we're introduced to.

Set primarily within an Italian sound stage, Berberian Sound Studio focuses mostly on the post-production details of making a film. But don't expect it to be anything like Day for Night. If anything, it's more along the lines of a nightmarish equivalent of it.

Berberian Sound Studio follows a sound engineer (Toby Jones) as he begins working on -- initially unknowingly -- a giallo film called The Equestrian Vortex. As time wears on, it becomes clear that the film's graphic nature is beginning to affect him. But to what extent will it begin to change him?

A clever trick Strickland enforces is that he doesn't show the horrors unfolding in The Equestrian Vortex, only descriptions of what's happening and its sounds. Just from those we learn how gruesome of a film it is. Only those completely numb from such content would be unfazed.

Berberian Sound Studio takes its time to unleash its scares but it's not an immediate punch. Strickland instead builds it up slowly then has it slowly seep out in all its unnerving glory. And Jones, a fine character actor in his own right, adds to the film's uneasy nature.

My Rating: ****
Posted by MovieNut14 at 11:16:00 AM
Email ThisBlogThis!Share to TwitterShare to FacebookShare to Pinterest
Labels: 2010s, movies, reviews