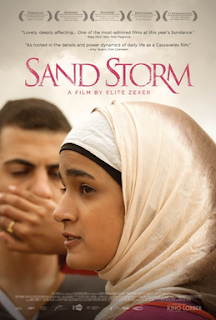 There has always been strife between varying generations. The continued feud between parent and child is a constantly ongoing one, the type that seldom reaches a conclusion. (Even more if said conclusion is a civil one.)

Elite Wexer's Sand Storm follows a plotline for this type of story: the daughter seeing someone their parents don't approve of. But Wexer doesn't focus strictly on the daughter and the boy she's head over heels for. She also focuses on the parents themselves.

Wexer doesn't shy away from the fact that daughter Layla (Lamis Anmar) nor mother Jalila (Ruba Blal) feel confined in the world they're a part of. (It is set in Israel after all.) They try to make the best of their current situations but how much longer can they endure it?

It isn't just Layla who rebels against her mother's conformities. One of her younger sisters (perhaps unknowingly) doesn't follow the usual formalities Muslim women are expected to follow. Of course to those not of that belief wouldn't grasp why such behavior would cause a sense of shame in their elders; it's not always easy to explain one's culture to another.

Sand Storm how parts of the world still perceive women. To those who live in a more (supposedly) civilized country, it seems almost like a prolonged form of abuse towards the fair sex/ But as Wexer shows with her film, there's a glimmer of hope for future generations. (A faint one, but it's there.)

My Rating: ****1/2
Posted by MovieNut14 at 11:17:00 AM
Email ThisBlogThis!Share to TwitterShare to FacebookShare to Pinterest
Labels: 2010s, directed by women, movies, reviews