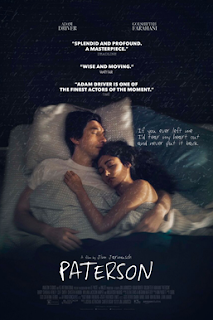 Life in itself may not offer anything of significance to some people. Sure, there are the many ups and downs but sometimes that's fine to those people. They're content with their day-to-day lives.

And the titular character (Adam Driver) of Jim Jarmusch's Paterson is no exception. He's a man of routine, every detail of his day barely changing. (His wife Laura (Golshifteh Farahani) is the polar opposite of him.) But it's how he carries on with his day that makes him both him and the film so interesting to watch.

There's also something interesting in how Paterson and Laura's mindsets work. Paterson is much more of a realist (though he writes poetry in his spare time). Laura, meanwhile, has a figurative and literal black-and-white way of thinking. It's this detail that shows why Jarmusch's one of the best directors working today.

Speaking of which, Driver has taken great lengths as of late to establish himself as an actor. (He has worked with the likes of Noah Baumbach and the Coen brothers in recent years.) Under Jarmusch's direction, he shows he's someone whose career you should keep an eye on.

Paterson makes for a good companion piece with Inside Llewyn Davis. (Coincidentally both films feature Driver.) It's a quiet glimpse into one's life, regardless of how remarkable it may appear to the outside world. But what matters is if they feel satisfied with how they spent their days.

My Rating: ****1/2
Posted by MovieNut14 at 11:05:00 AM
Email ThisBlogThis!Share to TwitterShare to FacebookShare to Pinterest
Labels: 2010s, director: Jim Jarmusch, movies, reviews