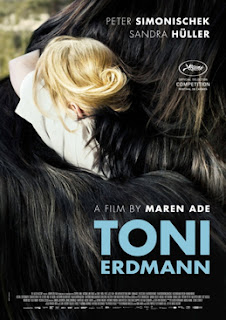 Time and time again, we get fiction revolving around the frayed bond between parent and child. A good majority of the time it's when the child is grown and distant (both physically and emotionally) from the parent. It's been examined so many times, how can it still be a functioning plot?

Now Maren Ade's Toni Erdmann is one of the latest titles to have this plot but there's something about it that makes it stand out. Maybe it has to do with its country of origin (Germany) or perhaps its genre (comedy). Either way, it gets your attention from the get-go.

Yes, "German" and "comedy" doesn't exactly sound like a combination of an ideal variety but Toni Erdmann makes it work. It doesn't rely on humor at the expense of other people but rather the playful frame of mind from Winifred (Peter Simonischek). He just wants people feel a little bit better, not to be taken down by mockery.

But where does the element of family come into Toni Erdmann? That happens when Winifred tries to re-connect with his workaholic daughter Ines (Sandra Hüller). It seems at first to be a fruitless endeavor from Winifred but Ines soon starts to open up, and it isn't all peaches and cream.

Toni Erdmann is both playful and mature in showing the bond between Winifred and Ines. It may make one want to reach out to their parents afterwards if they haven't been in contact with them recently. (Worth mentioning that more often than not female directors tend to get parent-child relationships down pat.)

My Rating: ****1/2
Posted by MovieNut14 at 11:19:00 AM
Email ThisBlogThis!Share to TwitterShare to FacebookShare to Pinterest
Labels: 2010s, directed by women, movies, reviews