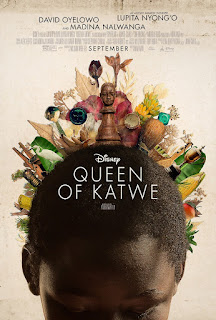 There's an annoying lack of diversity in films. (Television is at least making an effort.) Honestly, we've seen enough stories with white men as the lead. Is it too much to ask for a change of pace?

Thankfully Mira Nair heard that cry and responded with Queen of Katwe. (Honestly, an Africa-set film from an Indian director with a predominantly black cast? Yes, please.) After all, when was the last time a studio production boasted such a feat?

But it isn't just Nair's handiwork that makes Queen of Katwe soar. It's also the work from its actors, both newcomers and experienced. The performances from Madina Nalwanga, David Oyelowo and Lupita Nyong'o are excellent, not a false note at any point from them. Hopefully their performances won't be forgotten by year's end.

As she showed with Monsoon Wedding years earlier, Nair captures a culture that's unfamiliar to most English-speaking countries. She doesn't depict these customs to a level of cultural appropriation. Instead, what she shows is cultural appreciation.

Queen of Katwe is a film that'll bring a sense of joy to its viewers. (Then again, this is practically to be expected from a Disney film.) Nair offers her audience a story as far from the norm of usual Hollywood fare. Honestly, it's 2016; diversity still shouldn't be an issue media faces.

My Rating: *****
Posted by MovieNut14 at 11:15:00 AM
Email ThisBlogThis!Share to TwitterShare to FacebookShare to Pinterest
Labels: 2010s, directed by women, movies, reviews