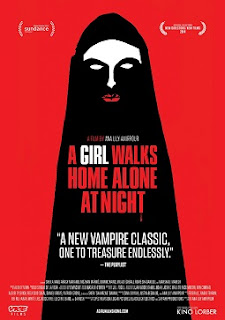 Ana Lily Amirpour's A Girl Walks Home Alone at Night quickly establishes itself as something different. It has a sleek sheen to it, something not often seen in films from overseas. And would you believe that this is Amirpour's first foray as a director?

But what is A Girl Walks Home Alone at Night about? Set in a desolate Iranian city, it follows the daily lives of those struggling to get by. Some try to make an honest living, others go down a more dubious path. Oh, and one of them is a vampire.

Okay, that last part may sound a bit out of place but Amirpour makes sure it doesn't stick out like a sore thumb. After all, anything where a vampire is concerned is bound to get into cliche territory. (And with other recent titles of the genre, it's proven not to be an easy task.)

That said, Amirpour does this with ease. She doesn't adhere to expected character types for her film, just lets the characters do their own thing. And Amirpour has the rare ability of effortlessly blending style and substance.

A Girl Walks Home Alone at Night is transfixing from start to finish. Amirpour shows immense promise with her career, and hopefully her next film will be of the similar caliber. (Fingers crossed!)

My Rating: *****
Posted by MovieNut14 at 11:17:00 AM
Email ThisBlogThis!Share to TwitterShare to FacebookShare to Pinterest
Labels: 2010s, directed by women, movies, reviews