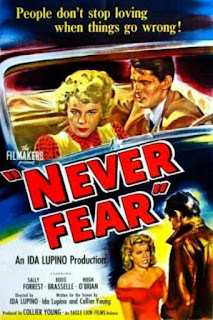 Ida Lupino's Never Fear opens with dancer Carol Williams (Sally Forrest) fretting over opening night at a small club. Aside from that, she has a promising career. (She's also recently engaged.) But the next day she falls ill from polio and everything starts tumbling downhill for Carol...or so she thinks.

Never Fear borrows a few elements from Lupino's encounter with the disease. (She had contracted polio in the previous decade.) Like Carol, she feared that she never be able to walk again, that her whole life was over. But Lupino makes sure to keep an optimistic tone, particularly shown in the closing title card: "This is not THE END. It is just the beginning for all those of faith and courage."

Being set primarily at a clinic, a number of the extras in Never Fear are actual polio patients. It adds a sense of realism to the film, making the environment Carol's in during her recovery not feel so staged. (Fiction within medical settings is often a tricky one to tackle for those unfamiliar with such material.)

That said, Never Fear feels more melodramatic than it should be. (Forrest does oversell it in several scenes.) This being a few years before Douglas Sirk became synonymous with the subgenre, what Lupino has on display can be flimsy a good deal of the time.

However, Never Fear nowadays is more of a documentation of the medical world. We've come a long way from a medical standpoint since the film's release, yes, but that's what stands out the most overall. (Granted, this was Lupino's first credited film as a director so maybe she was still trying to get the gist of it.)