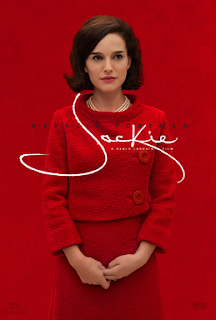 The opening notes of Mica Levi's score in Pablo Larraín's Jackie promise to be of a haunting nature. The same can be applied to what Larraín brings to his film. His first film from a female perspective, he chronicles how copes in face of both tragedy and the public eye.

Following Jackie Kennedy (Natalie Portman) in the aftermath of her husband's assassination, the film chronicles her as she puts on a brave face for the world to see. But while the nation mourns, we see how Jackie stays strong amid looming threats and society's expectations of her.

What makes Jackie so fascinating to watch is how the titular character works. She's stoic yet feeling, calm yet fierce. (There;s one moment that's deeply reminiscent of the opera scene from Birth.) Some may assume women aren't interesting subjects; clearly those people don't allow themselves to know such women.

And while Jackie is easily Portman's show from beginning to end, it's also an ensemble piece through and through. All of the actors, regardless of the size of their role, make sure to give their all for the film. And with a number of recognizable names and faces lining up the supporting roster, it's hard to go wrong.

Jackie is both intense and quiet in its execution, a rare feat for any film to achieve. As she showed with Black Swan, Portman has that feat on display as well. (Finally, her abilities are utilized for the time since she won an Oscar.) This is one that needs to be seen.

My Rating: *****
Posted by MovieNut14 at 11:31:00 AM
Email ThisBlogThis!Share to TwitterShare to FacebookShare to Pinterest
Labels: 2010s, director: Pablo Larraín, movies, reviews