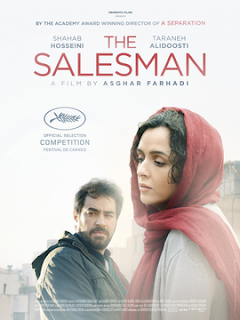 At what cost does one's actions have on both them and those around them? Sometimes there are no repercussions for said actions, other times there are. Regardless of the outcome, very rarely does one emerge unscathed in the aftermath.

Asghar Farhadi's The Salesman focuses on a such a scenario. Focusing on a young couple as they move into a new apartment, things start to shift once they begin to settle in. And after an intruder breaks in, everything starts going downhill.

So where does the film's title originate? Farhadi has Arthur Miller to thank for that (the couple is in a production of Death of a Salesman). And there are shared elements between the two works. (To say what precisely would give both works away.)

Like what he did with A Separation, Farhadi provides a slow burn for the actions of The Salesman. He allows the audience to get to know its leads before the plot really kicks in. It's a delicate process that very few creators do well, and thankfully Farhadi is one such person.

The Salesman is a bewitching film. We crave to know what's going on in their quiet lives, it never dawns on us that we're intruding their privacy. And like A Separation, we're left wanting more as the credits start to roll. That's always a promising sign for any creator's work. Here's to a fruitful career for Farhadi.

My Rating: *****
Posted by MovieNut14 at 10:01:00 AM
Email ThisBlogThis!Share to TwitterShare to FacebookShare to Pinterest
Labels: 2010s, director: Asghar Farhadi, movies, reviews