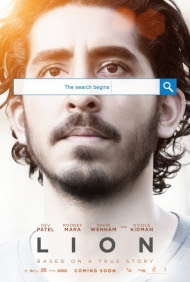 What would it be like to be removed from the comfortable world you're familiar with to one both figuratively and literally foreign to you? Naturally it'd be a jarring experience for anyone. But what if it happened at an impressionable age?

Garth Davis' Lion is a real-life account of such an instance. Based on Saroo Brierley's own experiences, it chronicles how he went from a small Indian village to be adopted by an Australian couple. And unlike other similar titles of this nature, it's not told from the perspective of a white supporting character.

Instead, it focuses on Brierley from beginning to end, first as an child (Sunny Pawar) then as a young adult (Dev Patel). Through both of these perspectives we see the sense of amazement and faint confusion as he discovers new things. (Grieg Fraser's cinematography adds to that sense of discovery.)

Of course with a film with a premise like this, Lion could've easily fallen flat on its face early on. But Davis ensures that doesn't happen, and the work from Pawar and Patel do the same. (There's also a more subdued moment from Nicole Kidman.) It's very affecting work from them all.

Lion is a quiet film about re-discovery and how one finds themself. Admittedly it does feel manipulative in some scenes but overall it's a film that works. Patel, who's been considerably underused since his breakout role in Slumdog Millionaire, will hopefully get more parts of notable quality because of his work here.

My Rating: ****1/2
Posted by MovieNut14 at 10:04:00 AM
Email ThisBlogThis!Share to TwitterShare to FacebookShare to Pinterest
Labels: 2010s, movies, reviews