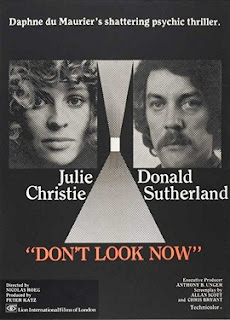 Nicolas Roeg's Don't Look Now doesn't appear to be your standard horror picture at first glance. If anything, it starts off as a story of two parents mourning the death of their daughter. But as is frequently the case with matter of this genre, things aren't always as they first appear.

Like some of Roeg's later films such as The Man Who Fell to Earth and Insignificance, Don't Look Now is more of an examination on how people behave behind closed doors. We follow John (Donald Sutherland) and Laura (Julie Christie) as they move around Venice. It's once they stray away from the many prying eyes that they break down, Laura more so.

And it comes to a head (pun not intended) to that infamous sex scene. (There are allegations that Sutherland and Christie were actually doing it.) But that scene wasn't there solely for shock value. Like later films Ordinary People (which also starred Sutherland) and In the Bedroom, the loss of a child can deeply affect a marriage. Roeg simply shows John and Laura caring for one another, regardless of what happened.

Roeg also shows a liberal use of color throughout Don't Look Now. The bright splashes of red against the gray Venetian winter provides a sharp contrast between mood and milieu. As shown with other films from around this time like Red Desert, color provides life to an otherwise cold world.

Don't Look Now has been referenced time and time again in the years to come but thankfully not to the point where it gets spoiled. (Looking at you, Psycho.) As Roeg proved throughout his career, he effortlessly blends story and spectacle.