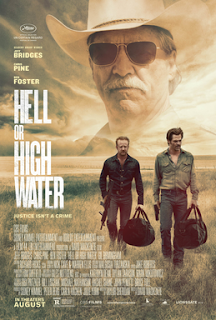 David Mackenzie's Hell or High Water certainly shows its influences from the get-go. The opening robbery almost turns into something straight out of Dog Day Afternoon. The various shots of Midwest plains call back to westerns of old. And it's the kind of picture that would make the likes of John Ford proud.

Hell or High Water depicts a slice of Americana on its last legs. (There are several passing shots of houses with "for sale" signs and billboards offering help with finances.) Mackenzie -- who hails from the United Kingdom -- captures the land of opportunity as it slowly morphs into anything but.

In a way, Hell or High Water is like a contemporary take on Bonnie and Clyde. Set within a poverty-stricken stretch of rural America, it chronicles two bank robbers as they try to evade the law. But in contrast to the infamous thieves from the Great Depression, these two have a more driven (and personal) motive for their crimes.

And Hell or High Water features a trio of strong performances. Unsurprisingly Ben Foster and Jeff Bridges basically steal the show (only a matter of time before the former gets recognized) but that's not to disregard Chris Pine's work. He doesn't have much to do acting-wise in the Star Trek movies but here, a flicker in his eyes speaks volumes. (Hopefully he'll get more opportunities in the not-too-distant future.)

Hell or High Water would've easily been lost in the muddled mix of late summer releases but thanks to the work from Mackenzie, Pine, Foster and Bridges, that is far from the case. Mackenzie, who also did the excellent Starred Up, shows immense promise with his future career.

My Rating: ****1/2
Posted by MovieNut14 at 3:34:00 PM
Email ThisBlogThis!Share to TwitterShare to FacebookShare to Pinterest
Labels: 2010s, movies, reviews