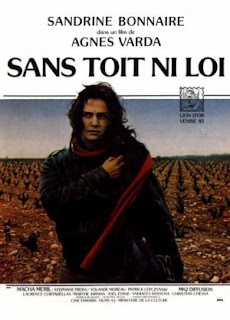 Agnès Varda's Vagabond opens with the discovery of a woman's frozen corpse in a ditch. What follows is a documentary-style examination as to how Mona (Sandrine Bonnaire) ended up there. And it's not as straightforward as it appears.

Throughout Vagabond we see Mona interacting with a menagerie of people and them later on talking about their impressions of her. Most of them don't understand her behavior while some felt sorry for Mona as she tries to survive every day. But one thing is clear: she's an unforgettable presence.

It isn't made clear why Mona is living a life on the streets. Did she have a falling out with someone close to her? Did she pursue such a living on her own accord? Varda doesn't verify which one it is but no matter. It's still fascinating to see Mona try to survive this way of living.

As she did with Cleo from 5 to 7 years earlier, Varda shows that Vagabond is also about the people Mona encounters. They have their own lives which Mona temporarily becomes a part of. Some welcome her with open arms, others are rubbed the wrong way by Mona's attitude. But as stated before, she's not forgotten when she leaves them.

Vagabond is a stunning film, thanks to Varda's keen eye. With a harsh backdrop of the French countryside in winter, she doesn't rely on spectacle to make her film work. Instead, Varda uses the bare essentials to have Vagabond be damn effective. (Is it ever.)

My Rating: *****
Posted by MovieNut14 at 8:44:00 AM
Email ThisBlogThis!Share to TwitterShare to FacebookShare to Pinterest
Labels: 1980s, directed by women, director: Agnès Varda, movies, reviews