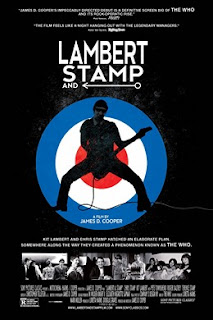 Usually it's only the members of the band that are the ones remembered in the years to come. Of course the likes of Brian Epstein and Malcolm McLaren are associated for the bands they made famous (the Beatles and the Sex Pistols, respectively). But there are those who tend to get overshadowed.

James D. Cooper's Lambert & Stamp chronicles how two blokes from different upbringings who originally wanted to make an underground film ended up managing one of the biggest bands out of the United Kingdom. Those men were Kit Lambert and Chris Stamp, and that band was the Who. And it wasn't a walk in the park for any of them.

The documentary chronicles the early years of the band under Lambert and Stamp's management to how the former began to lose his way because of drug addiction. Surviving Who bandmembers Pete Townshend and Roger Daltrey recollect how they were treated by their new bosses and how they shaped them into one of the biggest acts around. And again, it wasn't without its ups and downs.

Townshend, Daltrey and Stamp (who died a few years before this was released) also talked about how fame and suddenly having money affected them, particularly Lambert and drummer Keith Moon. As shown time and time again, one can only rise so high before they come crashing down; that is what happened to Lambert and Moon. (Oh, the cost of fame...)

Lambert & Stamp shows how fame and fortune wasn't immediate for the Who and their managers but good things come to those who wait. Now all these years later, the Who is regarded as one of the best rock bands in the world. (If you think otherwise, go listen to Who's Next from beginning to end.)

My Rating: ****
Posted by MovieNut14 at 10:09:00 AM
Email ThisBlogThis!Share to TwitterShare to FacebookShare to Pinterest
Labels: 2010s, documentaries, reviews