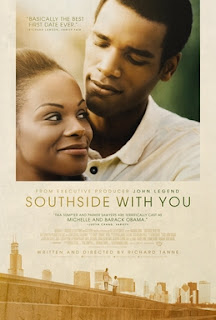 It's always risky to make something based on real events when the people associated are still very much alive. Still, if the person who's making said work knows what they're doing then perhaps it could benefit in the end.

So how does Richard Tanne's Southside with You fare? Admittedly it might feel cheap making a film about the current First Couple as they're about to leave the White House but Tanne eschews such sentiment.

Set in 1989 Chicago, Southside with You focuses on the first date between co-workers Michelle Robinson (Tika Sumpter) and Barack Obama (Parker Sawyers). Though set in the years before Rodney King made headlines, Tanne shows that racial discrimination was still unfortunately prevalent even when it doesn't make the news.

What Tanne also show with Southside with You is the man that Obama would become as President. He sees the wrongs of the society he's a part of and vows to change them. (Michelle herself laments how her hard work is for naught because of her skin color.) And in light of current events, it's hard to say that society has changed a great deal.

Southside with You is charming in its own way but there's more to it than a date with a future political couple. Being made in the Black Lives Matter era, it depicts that a change in social justice is needed now and we are the ones that can make that happen.

My Rating: ****1/2
Posted by MovieNut14 at 10:19:00 AM
Email ThisBlogThis!Share to TwitterShare to FacebookShare to Pinterest
Labels: 2010s, movies, reviews