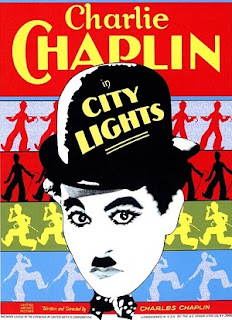 It must have been a daunting task for Charlie Chaplin to make City Lights in a time when silent pictures were already a thing of the past. (Richard Attenbourough's biopic on Chaplin decades later shines a light on this conundrum.) No one thought that such an endeavor would work. But Chaplin knew it would.

Admittedly City Lights has a premise that could easily cheapened (Chaplin's tramp falls for a blind flower girl) but he makes sure that doesn't happen. (A hard task for anyone, let's be honest.) And in under ninety minutes, Chaplin creates a story for the ages.

Between him and Buster Keaton, Chaplin is the winner when it comes to story. (Keaton, however, is more victorious when it comes to stunts.) As Chaplin would later do with the likes of Modern Times and Limelight, he depicts a sense of nostalgia for bygone era, yearning for a time no longer there.

Chaplin also shows with City Lights is how he utilizes sound in an otherwise silent film. Using a self-composed score and some well-placed sounds effects, he displays a knowing sense of the evolving medium but would prefer to adhere to old methods. Only Chaplin could do such a thing.

City Lights could've reached sappy levels that could rival your average 1950s melodrama but Chaplin ensures that doesn't happen. As proven by the final scene, he displays so much poignancy and heartbreak with a gentle flicker in the eyes. After all, one picture is worth a thousand words.