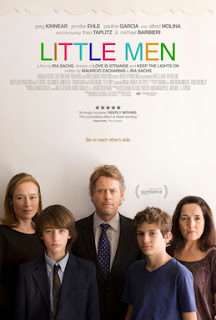 One's adolescence is supposed to be a time where one enjoys their last days of innocence. But often times this is when one becomes aware of the world around them. And usually what they discover isn't pleasant.

Ira Sachs' Little Men has two stories unfolding at the same time. One focuses on two boys as they become friends while the other story revolves around their parents in a property dispute. Infrequently the two overlap which gives its final conclusion more of a punch.

As he showed previously with Forty Shades of Blue and Love Is Strange, Sachs has a particular knack for depicting human behavior. With Little Men, he shows how flawed of a species we are. One's best quality could be another's worst. To quote Some Like It Hot, nobody's perfect.

And as also expected from Sachs, Little Men provides a menagerie of complex characters. Whether it's the two boys, their parents or a more secondary role, he makes sure that none of them are one-dimensional. (He also has a particular skill for writing at a perspective as an outsider looking in.)

Little Men is merely further proof that Sachs is one of the more interesting directors working today. He writes stories about who we are and our personal failings. Hopefully his due will come in the not-too-distant future. (Love Is Strange is also proof that Sachs should be better known.)

My Rating: ****1/2
Posted by MovieNut14 at 10:12:00 AM
Email ThisBlogThis!Share to TwitterShare to FacebookShare to Pinterest
Labels: 2010s, director: Ira Sachs, movies, reviews