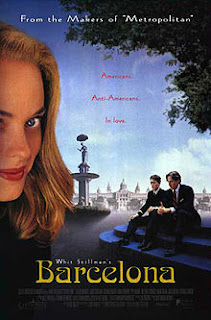 Do we really know what we want in our lives? Are we truly content with the jobs we have and the people we know? If not, we're not being forced to live such a life.

Whit Stillman's Barcelona explores such a topic within a Cold War setting. As he did with his previous film Metropolitan, Stillman chronicles those disillusioned by what's expected of their generation. And boy, are they jaded as a result.

Stillman recruits Taylor Nichols and Chris Eigeman again for Barcelona in roles similar to those in Metropolitan (Nichols the nebbish outsider, Eigeman the know-nothing know-it-all). Though here there's some more depth to their characters. (Similarly, Stillman seems to have a faint grasp on how to write female characters.)

Throughout Barcelona there's a clash of cultures between the lead characters and their setting. (Eigeman at one point tries to correct street graffiti with a pen.) They try to fit in but all they mostly succeed in doing is sticking out like sore thumbs. (Such an example happens at one of the parties they attend.)

Barcelona doesn't have the same spark as Metropolitan but it has its charms as well. Nichols and Eigeman's performances further proved what the world of cinema would further expect from Stillman: commentary on the changing jaded society we're a part of. (And that's not something that'll go away anytime in the near future.)

My Rating: ****
Posted by MovieNut14 at 9:15:00 AM
Email ThisBlogThis!Share to TwitterShare to FacebookShare to Pinterest
Labels: 1990s, director: Whit Stillman, movies, reviews