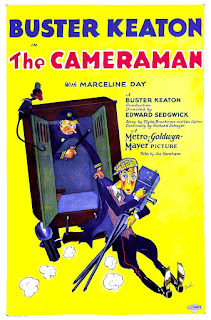 Edward Segdwick and Buster Keaton's The Cameraman opens with the titular photographer (Keaton) becoming instantly smitten with Sally (Marceline Day) and trying to woo her afterwards. And much like Keaton's earlier works, what ensues are a lot of physical hijinks.

Similar to The General from the previous year, The Cameraman relies a great deal on Keaton's physicality. And when you watch him in action, it's a transfixing sight. (The fact he survived the many stunts in his films says everything you need to know about Keaton's professionalism.)

The Cameraman was Keaton's first film while under contract for MGM but it was that contract that marked the beginning of the end of his career. He was restricted to what he could put in his films, which must have affected him a great deal. (That said, MGM would use the film as an example for other directors as to how to make a comedy.)

And although it's a comedy, The Cameraman has its moments of poignancy as well. There are more somber moments throughout the film but there's a shift in mood from a slight flicker in Keaton's eyes. (Pay attention to his features during the end of the beach scene.)

The Cameraman may have been solely credited to Segdwick but this is Keaton's handiwork through and through. From the various pratfalls to the many gags, it's clear as to why there's a constant debate between him and Charlie Chaplin as to whom is the best silent-era comedian. (And it's a debate that'll never end.)

My Rating: *****
Posted by MovieNut14 at 9:17:00 AM
Email ThisBlogThis!Share to TwitterShare to FacebookShare to Pinterest
Labels: 1920s, director: Buster Keaton, movies, reviews