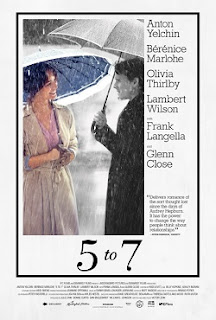 Life works in a peculiar way for some people. It can change for either the better or the worse with the slightest shift. And it could be because of something insignificant like crossing the street.

Such an instance happens to Brian (Anton Yelchin) when he first lays eyes on Arielle (Bérénice Marlohe) in Victor Levin's 5 to 7. What begins as a chance encounter slowly blossoms into something more complex, the very thing that both thrills and infuriates Brian. But what will become of these two?

Levin depicts a tale of love and its complicated nature. Arielle admits early on she's married and her husband is also having an affair. But she's not seeing Brian out of revenge for her husband's indiscretions; they're in an open marriage but there are rules to it. (No one said marriage was easy.)

This was one of Yelchin's final films so there's an added sadness to 5 to 7 following his death. All Brian wants in some stability within his young life, and he thinks he found it in Arielle. But her marriage makes Arielle deeply hesitant to stray. Will Brian be able to get what he deeply desires?

It may be marketed as a romantic comedy but that's only a half-truth with 5 to 7. It has a more somber tone that's similar to Like Crazy, another title from Yelchin's career. And like the earlier film, it's a sad reminder of what could have been for the young actor.

My Rating: ****
Posted by MovieNut14 at 8:41:00 AM
Email ThisBlogThis!Share to TwitterShare to FacebookShare to Pinterest
Labels: 2010s, movies, reviews