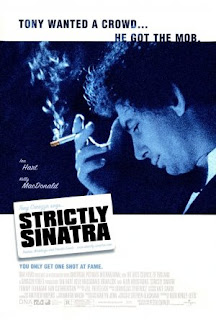 There are those who simply crave the spotlight. They want that validation more than the air they breathe. But would they be willing to cross certain moral boundaries?

Toni Cocozza (Ian Hart) is tempted to do so in Peter Capaldi's Strictly Sinatra. He yearns to be the next Ol' Blue Eyes but he's only eking out gigs in Glasgow dives. But some local gangsters like act enough to give him a little push...though not without a catch.

Indeed the plot is a familiar one often found in lesser titles but there's something to Strictly Sinatra that has a certain charm to it. Perhaps it's because of its contrast between the glitzy clubs the gangsters frequent and the grimy city streets that house them. (Even Scorsese doesn't depict such a thing in his films.)

Another detail of Strictly Sinatra are the homages to days passed. From the many allusions to the Rat Pack to cues reminiscent from films of the era, Capaldi adds a sense of nostalgia to his film. But as Toni learns time and time again, nostalgia by its lonesome won't pay the bills.

Strictly Sinatra may be a lesser-known title from the past decade but it shouldn't be a forgotten one. Capaldi (who was a few years away from The Thick of It) has a creative spark on display here and hopefully he'll use it again in the near future. (After all, that spark got him an Oscar several years prior.)

My Rating: ****
Posted by MovieNut14 at 8:44:00 AM
Email ThisBlogThis!Share to TwitterShare to FacebookShare to Pinterest
Labels: 2000s, movies, reviews