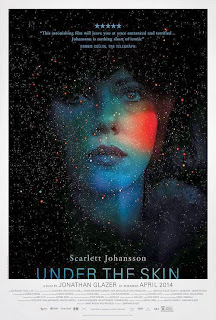 Jonathan Glazer is one of those filmmakers whose work tends to grab a hold of its viewers and never lets go. His first two films Sexy Beast and Birth enthralled audiences during the last decade, and then Glazer just vanished following the release of the latter.

Now ten years after the release of Birth, Glazer returns with Under the Skin. Loosely based on Michel Faber's novel, the film is a surreal portrait in every sense of the term. (I'm still trying to wrap my head around it.)

Starring in Under the Skin is Scarlett Johansson, who is very much showcasing her abilities as an actress here. She barely speaks, her face rarely alters...and all of this has you wondering what makes her character tick. What is the story behind her? It's a performance that simply does not leave your memory.

Likewise with the other aspects of the film. Whether it be Dan Landin's cinematography or the unbelievably chilling score from Mica Levi, they're guaranteed to stay ingrained in your mind for better or for worse. It's certainly one of the most aesthetic films I've seen in recent memory.

Under the Skin is both extremely bizarre and absolutely hypnotic. You're not sure what's happening and yet you can't help but watch. Thanks to Glazer's keen eye and Johansson's transfixing performance, Under the Skin is one of those films that people will be talking about in the years to come.