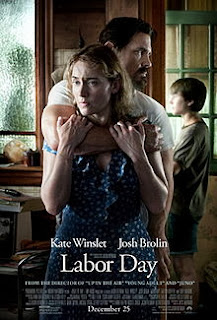 The lead characters in Jason Reitman's earlier films (Thank You for Smoking, Juno, Up in the Air, Young Adult) are outspoken people who usually go by their own rules. These films are also usually told from their point of view.

So that's what makes Reitman's new film Labor Day feel so different from his other four. The story is told through the eyes of Henry Wheeler (Gattlin Griffith) as he and his mother Adele (Kate Winslet) hide escaped convict Frank Chambers (Josh Brolin) during the Labor Day weekend. A strange premise, sure, but Reitman knows how to keep it interesting.

There's something about the moroseness in Adele's face that has you hoping that something (or someone) will come along and take her sadness away. And whenever she looks happy, the world seems a bit brighter. That's something of Winslet's acting I've always admired. Dour one minute, radiant the next.

Like he did with the stars of his other films, Reitman gets great work out of his actors. Brolin shows a soft nature underneath his tough guy image. Winslet adds another layer to the unfulfilled stay-at-home mother role she's been playing for the past few years. (See also Little Children and Revolutionary Road.) But I feel it's Griffith who's the star of Labor Day. Apart from holding his own against Winslet and Brolin, he provides most of the emotional heft of the film.

Labor Day, although somewhat darker than Reitman's other films, is still a welcoming entry. Bolstered by the three leads' performances, the film provides a mature portrait of nostalgia. Mr. Reitman, I anticipate your next film.