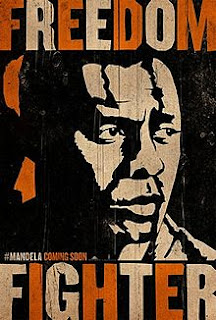 It's easy awards bait, isn't it? Actor agrees to play a person whose name was splashed all over the headlines a number of years ago. (In fact, that could be applied to most of the Best Actor hopefuls for this year.) And many times, the film relies more on the strength of the performance more than the script's.

Thankfully, Justin Chadwick's Mandela: Long Walk to Freedom strays from the expected biopic standards. It doesn't rely solely on Idris Elba's performance (or Naomie Harris') to make the film work. It's all thanks mainly to William Nicholson's script.

None of the facts shown are sensationalized for the sake of Hollywood nor does the film at any point feel like a history lesson. It's Chadwick's intention to make a film that told the whole story truthfully from beginning to end.

Chadwick also enlisted the right actors for his film as well. He chose Elba and Harris to play Nelson and Winnie Mandela. And man, they are just dynamic in this. I won't say that awards will be coming their way (though they might), but I think it's suffice to say they'll be actors nobody forgets.

Mandela: Long Walk to Freedom is everything the standard biopic should be. Chadwick's direction, Nicholson's script, the performances from Elba and Harris, Ales Heffes' music, Lol Crawley's cinematography...everything about the film works beautifully. Safe to say you need to see it.

My Rating: *****
Posted by MovieNut14 at 11:55:00 PM
Email ThisBlogThis!Share to TwitterShare to FacebookShare to Pinterest
Labels: 2010s, movies, reviews