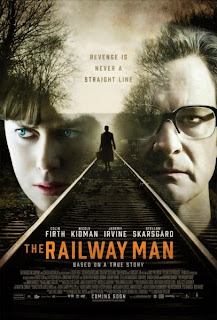 Physical wounds are temporary but emotional wounds are forever. This is what Patti Lomax (Nicole Kidman) learns after marrying Eric (Colin Firth) in Jonathan Leptizky's The Railway Man. She knows something in Eric's past changed who he is, but what exactly?

The Railway Man certainly isn't like any other film revolving around a character with post-traumatic stress disorder. Rather than have every scene feature said character and their anxieties, the film takes its time to focus on those around the affected character. (Also normally uncommon in films of this nature is they show what caused the trauma.)

Also worthy of a mention is David Hirschfelder's absolutely stunning cinematography. Take a single shot from the film and it's guaranteed that it's a piece of art in of itself. The framing for a majority of the shots are just gorgeous.

And the actors are just fantastic. Jeremy Irvine (he plays Eric in the flashbacks) forms the mold of whom Eric will become. Stellan Skarsgard (he plays a friend of Eric's) also holds his own amongst the likes of Kidman and Firth. Kidman in turn gives a strong performance. But, in my eyes, the best work came from Firth. Such a lost look on his face...

The Railway Man is a spectacular film. From the performances to the story to the direction, everything about it just worked. Whenever this gets a proper distribution, I hope you'll go and see it.

My Rating: *****
Posted by MovieNut14 at 11:44:00 PM
Email ThisBlogThis!Share to TwitterShare to FacebookShare to Pinterest
Labels: 2010s, movies, reviews