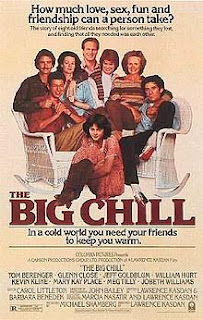 There's always that one film that sums up an entire generation. The Graduate focused on the baby boomers as they join the real life. (Likewise with Frances Ha for this generation.) It could be the story that makes it relatable, other times the characters.

In the case of Lawrence Kasdan's The Big Chill, it's the latter. Following the suicide of a friend, a group of friends get together to remember and mourn their friend. And then there are personal secrets that get revealed during that weekend.

I'll admit there were parts in the film that manage to hit close to home for, particularly a scene very early on in the film. The rest of The Big Chill was also a bit reminiscent of the following months after that particular event. So this was a far more relatable film than I initially thought.

As I stated above, it's the characters that make The Big Chill work. And for that, you need the right actors and Kasdan got the best ones for it. The actors were so great, I simply can't pick a favorite. (Though I was rather fond of William Hurt's work.)

Anyway, The Big Chill was simply a great film. Everything about it just works beautifully. It's not just a film for and about baby boomers. It's a film that handles coping with death very maturely with a nice mix of handling with other personal issues. It's great.

My Rating: *****
Posted by MovieNut14 at 10:19:00 PM
Email ThisBlogThis!Share to TwitterShare to FacebookShare to Pinterest
Labels: 1980s, movies, reviews