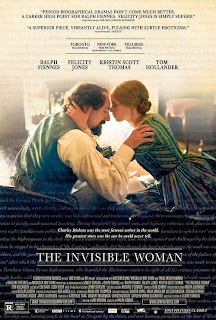 I admire Ralph Fiennes' work as an actor whether it be his sinister work in Schindler's List or something more charismatic like Quiz Show. His first directorial effort Coriolanus, although leaving me distant, had me curious as to what else Fiennes had to offer behind the camera.

His new film The Invisible Woman left me absolutely spellbound. Based on a novel by Claire Tomalin (and adapted by the brilliant Abi Morgan), it's a quiet film about the budding secret relationship between famed author Charles Dickens (Fiennes) and actress Nelly Ternan (Felicity Jones).

It may feel as an odd film for Fiennes to be following Coriolanus with to some, but he makes a very beautiful film. It's also surprising to see Fiennes, usually in heavy dramas or more mainstream movies, in something relatively light.

And in many ways, The Invisible Woman is very reminiscent of Jane Campion's Bright Star. Not just because they revolve around a famed writer's love affair but also because of the restrained depictions of said affairs. No thrashing limbs, no bare flesh, just the physical and emotional closeness between the two lovers. It's something I think the truly skilled can depict, and Fiennes and Jones are two such people.

The Invisible Woman is a very gorgeous film. From Fiennes and Jones' performances to Morgan's script to Rob Hardy's cinematography, everything about it just equates to visual poetry. It's one of those films that I really hope people will seek out and watch.