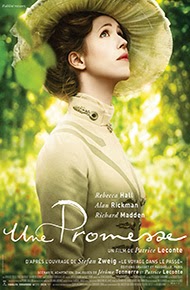 Patrice Leconte's A Promise boasts a cast featuring the likes of Rebecca Hall, Alan Rickman and Richard Madden, and chronicles a love story that spins over the years. And that is where all of the good points end.

Leconte tries too hard with his first film in the English language. It feels as if Leconte was trying to make something along the lines of Doctor Zhivago and ended up with one of those flimsy romance paperbacks you see at the airport gift shop. And boy, do I mean flimsy.

The whole focus of the film is the relationship between Friedrich (Madden) and Charlotte (Hall), and it falls flat on its face almost immediately. There isn't a proper build up between them and their supposed scenes of longing are laughable at best. For a romance film, it's pretty much dead in that department.

And there's the fact the film's set in Germany and you have English actors not even attempting the accent. (I mean, English actors have been cast as Germans before, but come on.) I kept forgetting the film was set there until someone mentioned Germany. (It felt more English than anything else.) Ugh, misusing good actors. I can't stand that.

If it wasn't clear enough, A Promise is just abysmal. Sure, the actors have a few good moments here and there but they weren't given a hell of a lot to do. I did, however, like the last shot of the film (not just because that meant the film was finally over) but it felt too little, too late. Suffice to say A Promise isn't very promising at all. (Sorry, couldn't resist.)

My Rating: ***
Posted by MovieNut14 at 11:52:00 PM
Email ThisBlogThis!Share to TwitterShare to FacebookShare to Pinterest
Labels: 2010s, movies, reviews