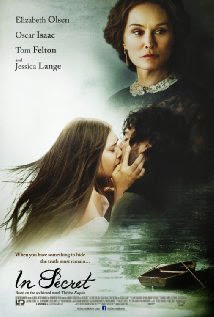 Infidelity. It's been around for as long as anyone can remember. In a number of cases, one or both halves of the affair divorce their respective spouses in order to get married. In more instances, divorce is the last thing on their minds.

This is what Charlie Stratton presents with his film In Secret. This isn't your standard infidelity drama. For starters, this is set during the 1860s rather than present day. And to set an apt frame of mind for the film, think of it as if Raymond Chandler was alive during the era of Jane Austen. (Yes, I know I'm off by half a century. Bear with me.)

I think what makes In Secret so fascinating to watch is what happens in the aftermath of the big moment. (I might have spoiled it in the introduction though.) Usually remorse from such an act is absent, but it starts to seep through in a particular character. (I might add they more or less agreed for it to happen.)

The actors are quite good. Oscar Isaac displays a devious charisma in his role. Tom Felton, meanwhile, is in a part very far from Draco Malfoy, showing a rather pathetic nature in his role. Jessica Lange at first embodies the mother-in-law from hell persona then slowly adapts into a broken shell of her former self. But this show belongs to Elizabeth Olsen. Her face just says everything.

In Secret starts off a simple costume drama then morphs into something more common for the present day. That is not a bad thing in the slightest. It's provocative. It's thrilling. And quite simply put, it's great...albeit a few small details. But either way, be sure to seek it out.

My Rating: ****1/2
Posted by MovieNut14 at 11:55:00 PM
Email ThisBlogThis!Share to TwitterShare to FacebookShare to Pinterest
Labels: 2010s, movies, reviews