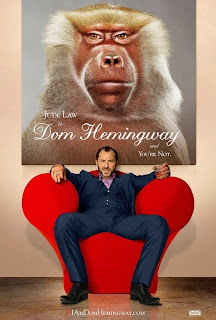 In the very first scene of Richard Shepard's Dom Hemingway, it's very clear that this is a role like no other for leading man Jude Law. He's not the charming leading man that he usually plays nor is he the lighthearted comedic part. Here, he's a bawdy, foul-mouthed ex-convict who's not afraid to speak his mind. (And that's when he's sober.)

In a way, Dom Hemingway feels like the kind of film Guy Ritchie would normally make but better. (That says a lot right there.) It doesn't rely on crazy shoot outs or even crazier heists (though there is a sort of heist near the end). It focuses more on Dom's life once he gets out of prison.

Also different from the standard Guy Ritchie movie is the fact Shepard wants to show Dom is in fact a human being (albeit a very screwed up one) rather than just someone with absolutely no fucks to give. It's these quieter scenes that continue to make me realize that Law is one of the most underappreciated actors working today.

Dom Hemingway also has a few other notable actors amongst its cast. There's Richard E. Grant who most certainly has his fair share of one liners. There's also Demian Bichir who radiates smugness throughout his screentime. And then there's Emilia Clarke who captures anger and neglect perfectly. But this show is owned by Law.

Dom Hemingway is one hell of a riot. It has the right balance of inappropriate behavior without getting too crass. And even though he was the last person I'd imagine in a role like this, Law just nails it.

My Rating: ****1/2
Posted by MovieNut14 at 11:44:00 PM
Email ThisBlogThis!Share to TwitterShare to FacebookShare to Pinterest
Labels: 2010s, movies, reviews