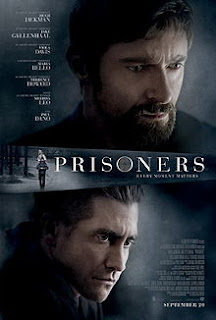 There is no worse feeling than losing a child. It doesn't matter whether death took them or a kidnapper, the loss of your own flesh and blood is devastating.

Just imagine the heartache the Dovers (Hugh Jackman, Maria Bello) and the Birches (Terrence Howard, Viola Davis) feel throughout Denis Villeneuve's Prisoners. Both couples lost their daughters to the hands of a kidnapper, and they're frantic to find where they are. One of them is willing to break the law.

A film of this nature relies on the right actors to make the film. Villeneuve wisely chose the ideal actors for his film. (Other actors in the film include Jake Gyllenhaal, an unrecognizable Melissa Leo and Paul Dano.) They're all great, but the best work came from Jackman. Seeing the hope slowly drain out of him is heartbreaking. (And he gets to levels of intensity that Sean Penn didn't even reach in Mystic River.)

Oh, and that cinematography by Roger Deakins is gorgeous. (Seriously, he doesn't have an Oscar yet because...?) His work here is rather reminiscent of how Harris Savides shot Zodiac, all of the dark, mysterious shadows shown prominently throughout. (Honestly, can he get an Oscar soon or something?)

Prisoners is a very well-acted drama though it does meander a bit. Several scenes are hard to watch (if you've seen it, you'll know which ones) and I wasn't that fond of the ending. Still, it has a few clever twists here and there, so that alone (well, and the performances too) warrants praise out of me.