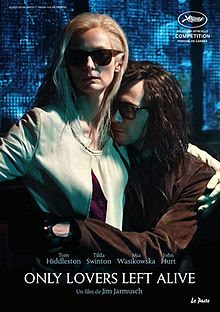 In the aftermath of the Twilight craze, it's hard to take vampires seriously. Now Hollywood will only depict them as pale, moody figures that would make even Bryon cringe. When will the vampires be cool again?


Fortunately, the answer can be found in Jim Jarmusch's Only Lovers Left Alive. Gone is the angst found in other supernatural romances. Jarmusch enforces a sleek take on vampires, which is practically expected when said vampires are played by Tilda Swinton and Tom Hiddleston. (Seriously, they're the coolest vampires since Catherine Deneuve and David Bowie.)

As well as veering away from the brooding bloodsucker image, Jarmusch also shies away from the ravenous vampire image as well. (You know, where they spend every other scene trying to get their fill.) Instead, Adam (Hiddleston) and Eve (Swinton) simply depicted as normal people...who are only active at night and survive on blood.

I admire the contrast between Adam and Eve. She is shown in white clothing while he's always in black. She's often in harsh lighting while he's lurking in the shadows. She's adapted to the times while he's rather...out of date with some things. (Half of the technology in his house is from the 70s or 80s alone.) They're not kidding when they say opposites attract.

Only Lovers Left Alive is most definitely the film that'll make vampires cool again. There's some pretty solid supporting work from Mia Wasikowska, Anton Yelchin and John Hurt, but this show belongs to Swinton and Hiddleston (the latter I hope will get more roles of this nature). So be sure to see this when you get the chance.